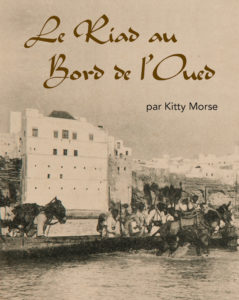 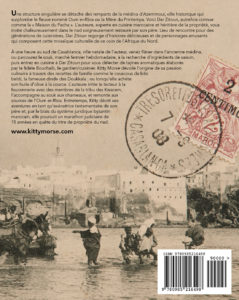 A plus tard! Merci 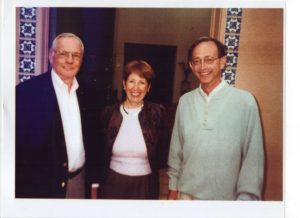 As many of you know from past Kasbah Chronicle MUSINGS (March 2019), I attended SPACE CAMP on Valentine’s Day weekend 2019, and played at being an astronaut with my friend Pat McArdle, who is, like me, a space “cadet”.

This is what spurred on the whole idea:

The 50th anniversary of the landing spurred a long-held desire to attend Space Camp at the US Space and Rocket Center in Huntsville, AL.

Such was my initial fascination with the moon landing that, on D-Day, July 20, 1969, I organized a moon party in Milwaukee (WI) where I attended university, and served up a green sponge cake to family and friends. (Remember when the moon was made of green cheese?) Little did I know at the time that the Man on the Mon himself would appear at my doorstep decades later.

I had picked up a brochure advertising Space Camp in 1996. Each year since, I added it to my bucket list and slipped it under my desk calendar. The time had come to act! I called the number on the faded brochure. Yes! Adult Space Academy (US Space and Rocket Center(www.spacecamp.com) offered adult weekends of astronaut training. A fellow space junkie joined me in my lunar fantasies and we booked a fight to Huntsville.

Space Camp, aka www.RocketCenter.com, is the brainchild of rocket scientist Dr. Werner von Braun who spearheaded the development of the Apollo-era rockets that took America to the moon, and his colleague Edward Buckbee, the camp’s first director. Indeed, the Huntsville site counts a number of astronauts, engineers, and space scientists among its alumni, as well as among its docents.

The 363-foot-tall replica of the Saturn V moon rocket, visible for miles across the flat Alabama landscape, serves as a beacon for Space Camp. Upon arrival, we checked in at Habitats for Space Camp, a building resembling a well-fed caterpillar, to claim our bunk beds, before heading out across Tranquility Base where the enormous Pathfinder shuttle simulator and Saturn V, hold center court.

Our lunar-centric program kept us on the go from 7:30 in the morning until 9 at night. Over two-and-a-half days, we bonded with the dozen millennial members of our Team Pioneer, directed a simulated shuttle landing, bounced off bungee cords to experience lunar gravity, built a model rocket, and explored the nooks and crannies of the Space Station. We had the opportunity to tour NASA’s (real) Marshall Space Flight Center where scientists are in constant contact with the International Space Station.

The highlight was taking part in the Extra Vehicular Activity (pardon me, the EVA) which mirrored the Hughes Westar Satellite Repair spacewalk, an actual mission performed in 1984 to repair a communications satellite and replace the antennas to restore communication.

For that, two experienced attendants helped me into an ice jacket (the space suit is so hot that astronauts need to wear such a clothing item for an extended mission), and then into a space suit and helmet. The extra 15 pounds of ice made it somewhat arduous to crawl out into ‘space’ where I was tethered to a harness about 15 feet off the ground. My mission was to pull myself along a cable encircling the satellite, retrieve a malfunctioning antenna, and hand it to my partner who stood on a mechanical limb 20 feet off the ground. 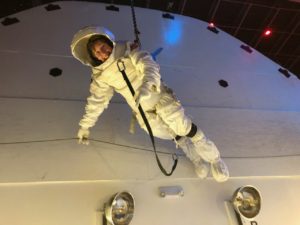 The next morning, we breakfasted at the Mars Grill in the company of former NASA scientists and engineers, one of whom had designed the lunar rovers used during several moonshots. Both the Lunar Rover and the Saturn V Apollo moon rocket are on display inside the hangar-like Saturn V Hall of the Davidson Center for Space Exploration. We were left awestruck in front of the extraterrestrial accomplishments of Neil Armstrong and his moon bound colleagues.

Barely a dozen years earlier, I had the good fortune to meet the “man on the moon” in person on my home turf in Vista, CA. Friday April 20, 2005, we received a call from our neighbor, Bob H., a distinguished retired Marine test pilot.

“We are expecting a special guest. Would you like to come over for drinks?” Neil Armstrong and Bob were roommates in flight school and their friendship went back decades. The astronaut was to drop by Bob’s on his way to accepting an award from the Golden Eagles, a prestigious association of military flyers. That year, the organization was holding its annual meeting in San Diego.

Needless to say, my anticipation reached its peak when we knocked on Bob’s door. He had advised us not to allude to the moon landing. Neil had had enough of the world’s attention (we later learned that a barber had been selling locks of the astronaut’s hair on eBay). Neither should we ask him to pose for pictures (though Neil later broke his rule for us.)

“Hi, I am Neil Armstrong,” said the man himself, as he stood up to shake our hands.

His broad built came as a surprise. In my mind’s eye, he was still the youthful, slender astronaut who first stepped onto the lunar surface and declared to a transfixed planet earth glued to millions of television screens:

“That’s one small step for man, one giant leap for mankind.”

Decades on, I faced a grey-haired man in his sixties, wearing coat and tie. His eyes sparkled behind his glasses. He looked unmistakably like the younger Neil Armstrong.

My husband, more quick-witted than I, had his opening message ready:

Hi!” he said, shaking Neil’s hand. “Neil, I have had a mound of trouble trying to coax your former roommate out of his shell!” Bob, of course, being the quintessential extrovert.

“Well, that must have taken all of five minutes,” responded our visitor with a chuckle. Our former neighbor, Bob, was probably one of the most gregarious men we had ever met. At one point, knowing I was born in Morocco, the astronaut broached the subject of Moroccan cuisine. He was an avid golfer who had been a guest of the King of Morocco on numerous occasions. Indeed, Hassan II, father of present King Mohammed VI, appointed Armstrong to the Moroccan Academy of Sciences. Thus, the astronaut had visited my home turf a number of times. He sampled my briouats (Moroccan eggrolls): “My, these are tasty,” he said. “Do Moroccans use curry?” I explained as diplomatically as I could that curry is not a spice in the Moroccan repertoire. No matter. My hero reached for another briouat.

I floated on air on my walk home. The phone rang as soon as we stepped inside our front door. It was Bob.

“Hey, neighbors! Neil really enjoyed his visit with you. Could he come over and have his picture taken with you two?”

“Wait! Let me check my watch: “OK!” Owen and I floated off into “space” with excitement. 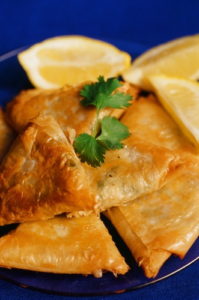 Salt and pepper to taste

In a medium saucepan, place the thighs, cinnamon, ginger, onion and water. Cook over medium heat, turning the thighs over to coat with spices, for 15 to 20 minutes. With a slotted spoon, transfer the meat to a cutting board. Let cool and finely chop the chicken.

To the pan, add the beaten egg. Cook, stirring, until the sauce thickens and the egg sets. Season with salt and pepper. Add the sauce to the chopped chicken. Add the cilantro and the preserved lemon. Mix well. Set aside.

Stack 3 lumpia wrappers. Cut into strips 2  ½-inch wide. Proceed in a similar manner for the remaining wrappers. Stack the strips on top of each other and keep them covered with plastic wrap or a lightly dampened cloth to prevent drying while filling the briouats.

At this point, briouats can be frozen. Place on a tray and freeze. Transfer to a tightly sealed container. Freeze up to 3 months.

To fry, do not thaw. In a heavy medium saucepan, pour the oil to a depth of 2 inches. Heat it until it reaches 325 degrees F, or until a piece of dough dropped into it sizzles instantly. Fry the briouats in batches until golden, about 6 to 8 minutes. Using a slotted spoon, transfer to paper towels to drain. Keep warm in the oven. Serve immediately with a sprinkle of lemon juice.