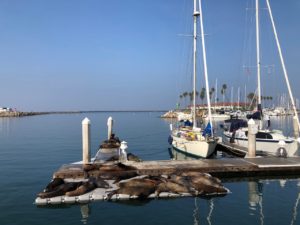 These seals at Oceanside Harbor have the right idea: Wake me up when COVID is over…

In English and en français

Notes on my next cookbook

A new twist on a Moroccan classic

In this, the ninth month of the COVID pandemic, I am at a loss for words. I cannot complain, since our Vista Kasbah is the best place for me to be sequestered—but boy, am I getting itchy feet. Yet, the idea of getting on an airplane still does not appeal to me.

Actually, the pandemic has served an exciting purpose: I have been hard at work on my next book, Bitter Sweet: legacy from my Alsatian ancestors (working title). Beautiful food photography included too!

I received an email blast from the High Atlas Foundation, a most worthy NGO in Morocco :

Toumliline remains a magical name in my mind. Toum as we all called it, was a refuge for Catholic nuns in the Middle Atlas Mountains. It was a popular destination and Catholic retreat for many of my Catholic friends, especially at Easter:

“On part a Toum….” they would announce… each year.

Those among you who accompanied me to Morocco will remember the longest day of the trip as we crossed the Atlas Mountains from Fez to the oasis of Tinehrir. Half way up, Tioum hides among the forest of cedar trees not far from the snow slopes of the Mishliffen. Macaques on the way to Toum… 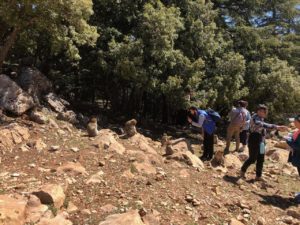 The very first avocado from our very own tree.. 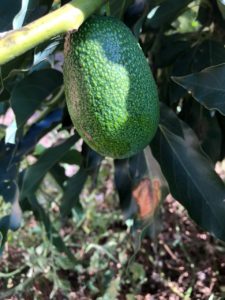 Let’s head to the kitchen

(variations in Cooking at the Kasbah, The Vegetarian Table: North Africa and Mint Tea and Minarets.)

do you get the idea I love this egg dish?!!

Egg Tagine with Olives and lox

Make the tomato chermoula sauce ahead of time:

Adapted from Mint Tea and  Minarets: a banquet of Moroccan memories.

Pour the egg in a small oiled skillet. Swirl around as for an omelet. Salt and pepper to taste. Top with 2 tablespoons of the chermoula, and diced salmon.

More: The French are crazy about “crumbles” savory or sweet. Who knew that “crumbles” (and biscuits d’Halloween) would make such an impact?

Bring the oil to medium heat in a pan or skillet. Saute the zucchini slices until soft. Drain and set aside.

For the crumble, combine the flour, bread crumbs, parmesan, and salt. Add the softened butter and mix with your fingertips. Alternate layers of zucchini, and ham (if using) in a medium baking dish. Top with the crumble mixture and bake for 20 to 25 minutes.

hlin, owner of Seabreeze Farm in Del Mar (CA) a mere 2 or 3 miles from the ocean, grows and delivers her own GORGEOUS produce. Heck her out!

News of Morocco, France, and beyond:

Casablanca is undergoing a renewal, and hopefully a getting a good coat of paint. We lived on Avenue Hassan II, across from the park, one the city’s main arteries. This is what our building looked like in the earl 1920s…a beautiful Moorish art deco structure. it needs a new coat of paint in this century. Local casablancais have finally realized what an architectural treasure they have in downtown Casablanca.. 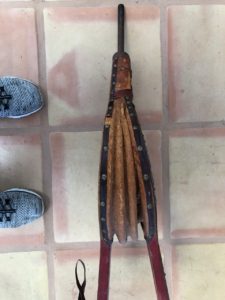 All these will appear on my dedicated page.

These lithographs were produced by he same printer who printed my first book, Come with me to the Kasbah. Printer and publishing house are long gone 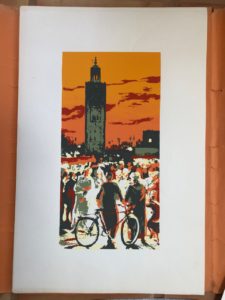 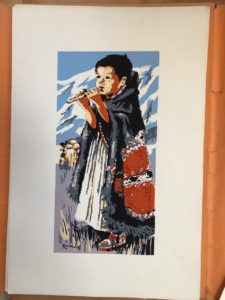 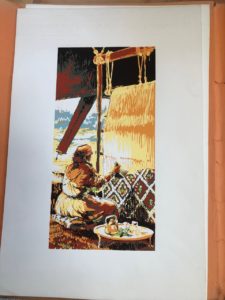 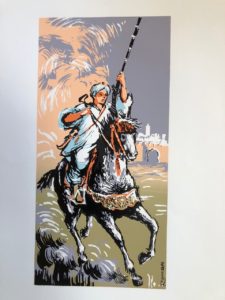 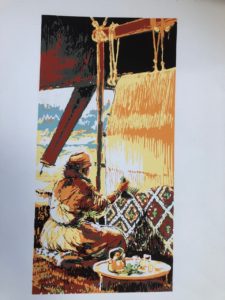 What a lovely surprise to wake up to this message on December 1, 2019

“Le riad au bord de l´oued  is the Winner for Morocco in the Gourmand World Awards in the category B12 Translation .

You now qualify to compete for Best in the World 2020  with winners from other countries in the same category. This year a total of 225 countries participated in the competition. You can see  the complete list of winners 2020 on www.cookbookfair.com

The following link will give you a General Presentation of the Gourmand Awards, including our Gourmand World Summit 2019 at UNESCO, the International Village of Gastronomy in front of the Eiffel Tower, and the  awards ceremony in Macao. last  July

Your book will be in the events next year. . .”
Congratulations and best wishes for 2020

Please like the Facebook page or the Amazon.com listing. Every little thumbs up helps, I am told!

Until my return from Morocco. . . 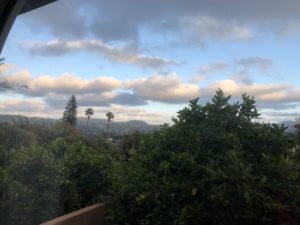 I leave behind these gorgeous Vista clouds

March slipped away from me. In am in full “packing” mode. We have a full tour! April 23rd to May 2nd, I will be in Morocco with Adventures by the Book. And this is the view of the Mother of Spring river from Dar Zitoun’s atrium window.

I am still basking in the thrill of my lunar adventure (before it appeared in the NY Times!)

Space Camp was one of the most fun experiences of my life. Please bear with me: just one more picture!

Ripe fruit fall off our blood orange tree faster than I can pick them! To savor their flavor at other times of the year, I make this ambrosial syrup, keep it in the fridge, and serve it with champagne or with carbonated water for a refreshing summer beverage.

For the syrup: Place juice, water, and sugar in heavy pan. Simmer for 20 to 30 mns to viscous liquid stage. Refrigerate. Add 2 tablespoons to a glass of white wine, champagne, or prosecco. Or simply combine with water and ice cubes, to taste.

For the jelly: Simmer 20 mns longer, or until mixture forms a very soft ball when dropped in cold water.  Let cool overnight on the kitchen counter. Store in sterilized containers and seal. Spread on toast, or use as a topping for yogurt, mascarpone, ricotta, etc . . .

Kitty in the media: http://online.anyflip.com/dmdy/nwaa/mobile/index.html

Wine Dine and Travel Spring is a gorgeous online travel magazine, and free for the download. This issue features Argentina in depth. I am very excited to be among its contributors. Read about my trip to Hoi An, one of Vietnam’s most historic cities.

Learning Is For Everyone (LIFE) Oceanside LIFE.

Another shot from my most recent trip to Morocco:

A cup of Starbucks Coffee at the HUGE

May you find much to celebrate this

(preferably with a champagne toast.)

As I was huffing and puffing through my Jazzercise class this morning,

For those outside Southern California, tamales are a Mexican Christmas

Around these parts, families get together to make dozens and dozens

(and dozens) of savory and sweet tamales to share with loved ones.

Still huffing, my thoughts turned to my own version of tamales, one using

couscous instead of the traditional Mexican masa. I once took dozens

(and dozens) of corn husks to Dar Zitoun, to demonstrate to my Moroccan

The recipe is long, but believe me, the result is worth it!

as a food judge at the Indio International Tamale (sic) Festival, in California’s Coachella Valley.

Immerse corn husks in a large pot of boiling water. Remove from the heat,

and let stand until soft and pliable, 40 to 45 minutes. Drain husks and pat

dry. Reserve 3 or 4 husks to line a steamer basket or colander.

With kitchen scissors, cut  2 of the husks lengthwise into 1/4-inch strips.

In a large saucepan, bring the water, salt, and 3 tablespoons of the butter to

a boil. Add the couscous and 1/2 cup of the coconut cream. Stir to blend.

Remove from the heat. Cover and let stand until the couscous is tender,

Quarter the bananas lengthwise, and cut into 1/4-inch dice. In a skillet over medium-high heat, warm the remaining butter. Add the dark brown sugar. Cook, stirring, until the sugar melts, 1 to 2 minutes. Add the diced bananas. Stir to coat. Cook until the bananas soften somewhat, 2 to 3 minutes. Remove from the heat. Add the pineapple chunks, cinnamon, and rum. Stir to blend. Set aside.

To assemble the tamales, position a husk so the long edge faces you. Place

1/4 cup of the couscous mixture in the center. With a spatula, flatten the

couscous to form a 3-by-3-inch square about 1/4 inch thick. Set a heaping

tablespoon of the pineapple-banana mixture in the center of this square, and

form into a sausage shape. Leave a 1-inch border of uncovered couscous

top and bottom, and 1/2 inch on the sides. Grasp the bottom edge of the husk and fold it in half lengthwise. Compress to seal the couscous to itself and enclose the filling.

Gently unfold the husk, then wrap it around the couscous, as you would an

egg roll. Fold over the tapered end, and tie with a reserved precut strip of husk. Compress the other end. Leave open. Proceed in this manner until all the tamales are assembled.

Line the bottom of a steamer basket or colander with the reserved husks.

Set the tamales upright, closed end down, inside the colander. Bring water

to a boil in bottom part of the steamer. Cover tightly. Steam the tamales

until firm and heated through, 40 to 45 minutes.

In a chilled metal bowl, whip the cream until soft peaks form. Fold in the

Place a steamed tamal in its husk on a dessert plate. With kitchen scissors,

cut away a large, V-shaped piece of husk to expose the couscous. Spoon a

generous dollop of coconut cream sauce on or near the tamal, sprinkle with cinnamon, and serve.

Note: Cans of coconut cream are available in liquor stores or Asian markets.

To celebrate both the holidays and persimmon season, I offer up the

Fallbrook (CA), provider of the plumpest persimmons in San Diego County. Margie was also a contributor to my book 365 to Cook Vegetarian (Harper Collins 1998)

with her recipe for Easy Overnight Lasagne, an unusual meatless version

assembled a day ahead.

Fuyu persimmons can be eaten out of hand, like an apple (they resemble

a square tomato.) Hachyias must attain a pudding like consistency. In France, persimmons

4 or 5 Fuyu persimmons, peeled, seeded, and sliced (like an apple)

a sprinkle of cinnamon

Place all the ingredients in a pan, and bring to a simmer.

Cook about 10 to 12 minutes. Remove from heat, and let cool.

Refrigerate until ready to eat. The mixture will thicken as it cools.